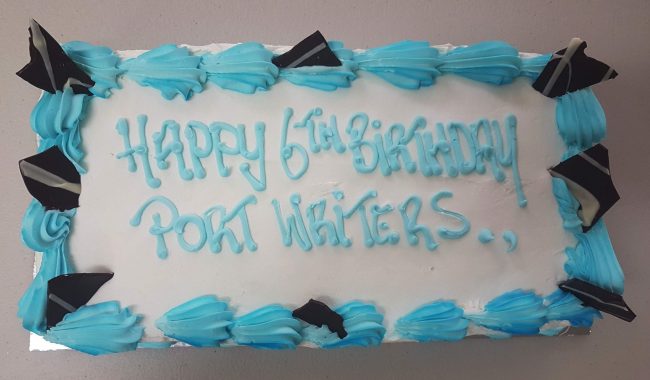 A small group of writers combined to form Port Writers back in 2015. Six years later the group still meets monthly and hosts a regular 500-word competition and an annual open writing competition. Amongst the business of running a group, the writers write and gather to share stories, ideas, trials and thoughts.

To mark turning 6, a challenge was set to reveal a character, book or author that started with the letter ‘S’. Written clues were shared enhanced by costuming effects.

Apart from the fun, there was quite a lot of learning as a by-product of this challenge as we found out about authors, books and characters we didn’t all know about.

Finishing off the frivolities was a sumptuous cake which even the finickiest eaters enjoyed and an acknowledgment of the efforts of the originators of the group and its ongoing members.

The more the merrier they say – come and join us as we head for year seven!

“You have to write the book that wants to be written. And if the book will be too difficult for grown-ups, then you write it for children.”

On Tomorrow! THE VARIOUS PATHS TO PUBLICATION Join us at our June 25 meeting. Anna Featherstone will explore what you need to know about publishing

About six weeks to go til our Comp closes - get writing. That time will be vacuumed up in the daily day-to-day. www.portwriters.com.au/2022-open/

THE VARIOUS PATHS TO PUBLICATION Join us at our June 25 meeting. Anna Featherstone will explore what you need to know about publishing today -